Note: Bollinger Bands® is a registered trademark of John Bollinger. 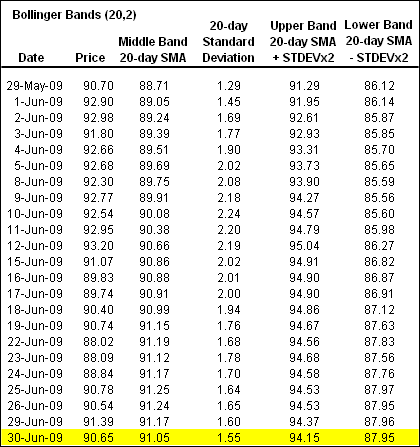 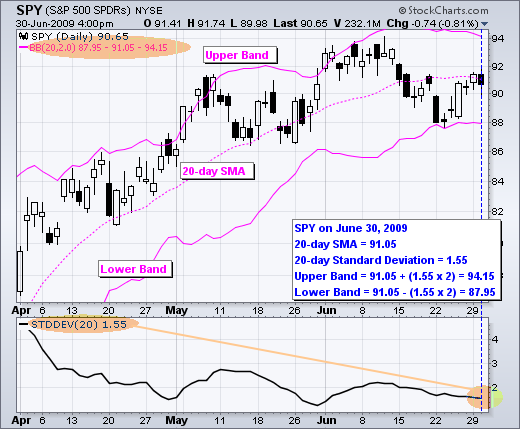 W-Bottoms area a portion of Arthur Merrill’s work that showed 16 patterns with a simple W shape. Bollinger also used differing W patterns with Bollinger Bands to recognize W-Bottoms. A W-Bottom appears in a downtrend and involves two reaction lows. Specifically, Bollinger searches for W-Bottoms where the second low is lower than the first, but holds above the lower band. There are four steps to validate a W-Bottom with Bollinger Bands. First, a reaction low forms; this low is usually, but not typically, below the lower band. Second, there is a bounce towards the middle band. Third, there is a new price low in the security. This low holds above the lower band. The capability to stay above the lower band on the test reveals less weakness on the last decline. Lastly, the pattern is validated with a strong move off the second low and a resistance break. 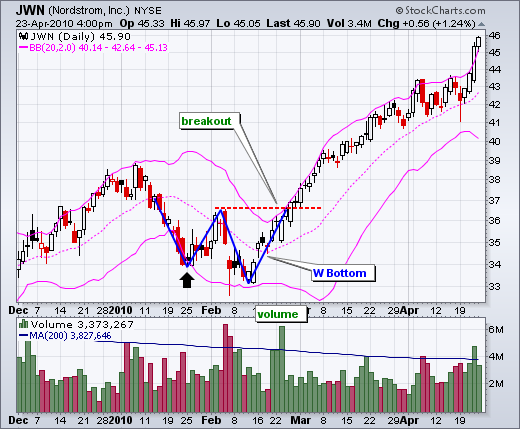 On Chart 2 it shows Nordstrom (JWN) with a W-Bottom in January-February 2010. a) The stock formed a low response in January (black arrow) and went below the lower band. b) There was a bounce back above the middle band. c) The stock went below its January low and stayed above the lower band. Even though the Feb-5 spike low broke the lower band, Bollinger Bands were calculated using closing prices so signals should be based on closing prices. d) The stock swept with expanding volume in late February and broke above the early February high. In Chart 3 you’ll see Sandisk with a smaller W-Bottom in July-August 2009. 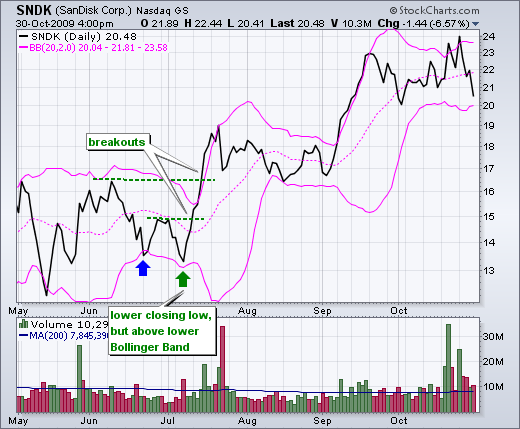 An M-Top, in its most common form, is much like a double top. But the reaction highs are not always equal. The first high can be higher or lower than the second high. Bollinger recommends searching for signs of non-confirmation when a security is making new highs. This is actually the opposite of the W-Bottom. A non-confirmation occurs with three steps. 1) A security forges a reaction high above the upper band. 2) There is a pullback towards the middle band. 3) Prices move above the prior high, however they fail to reach the upper band. This is a warning sign. The inability of the second reaction high to reach the upper band shows declining momentum, which can indicate a trend reversal. Final confirmation comes with a support break or bearish indicator signal. 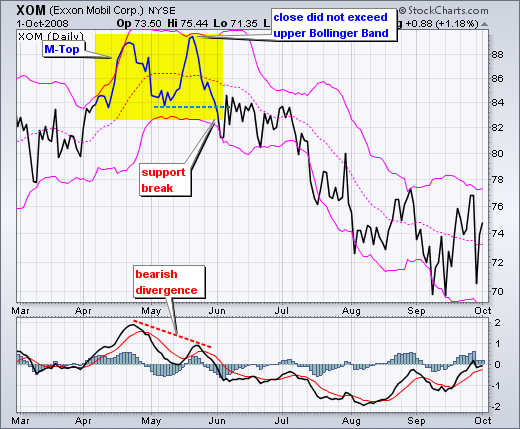 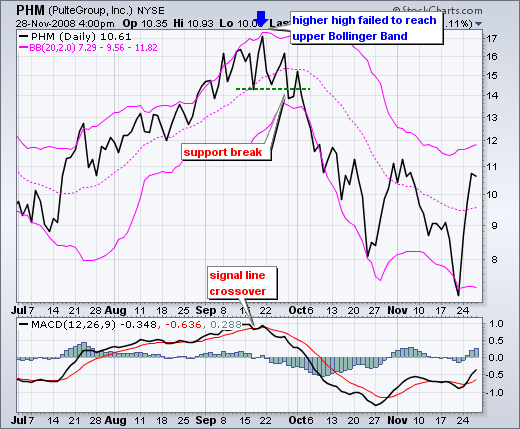 Pulte Homes (PHM) on Chart 5 shows an uptrend in July-August 2008. Price went above the upper band in early September to confirm the uptrend. After a pullback below the 20-day SMA (middle Bollinger Band), the stock motioned to a higher high above 17. In spite of this new high for the move, the price didn’t exceed the upper band. This flashed a warning sign. The stock broke support a week later and MACD moved below its signal line. Take note that this M-top is more complicated because there are lower reaction highs on both sides of the peak (blue arrow). This evolving top formed a small head-and-shoulders pattern.

Moves above or below the bands are not signals in itself. Moves that touch or exceed the bands are not signals, but rather tags as Bollinger would say. Plainly a move to the upper band indicates strength, while a sharp move to the lower band indicates weakness. Momentum oscillators work much the same way. Overbought is not necessarily bullish. It takes courage to reach overbought levels and overbought conditions can stretch in a strong uptrend. Likewise, prices can walk the band with many touches during a strong uptrend. Just think about it, the upper band is 2 standard deviations above the 20-period simple moving average. It takes a fairly strong price move to exceed this upper band. An upper band touch that occurs after a Bollinger Band confirmed W-Bottom would signal the start of an uptrend. Just like a powerful uptrend produces many upper band tags, it is also usual for prices to never reach the lower band during an uptrend. The 20-day SMA at times act as support. Actually, dips below the 20-day SMA at times give buying opportunities before the next tag of the upper band. 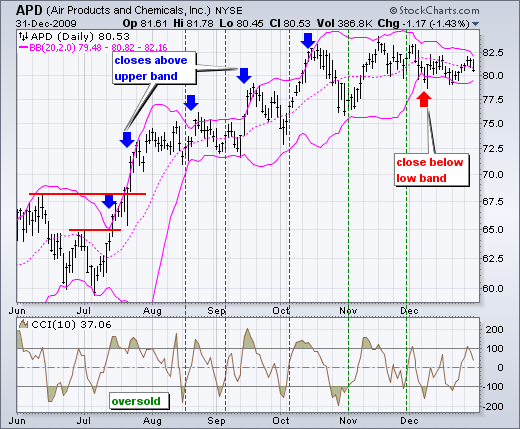 Air Products (APD) on Chart 6 shows a surge and close above the upper band in mid July. Notice that this is a big surge that broke above two resistance levels. A strong upward thrust is a sign of substance, not weakness. Trading turned flat in August and the 20-day SMA moved sideways. The Bollinger Bands narrowed, but APD did not close below the lower band. Prices and the 20-day SMA, turned up in September. Overall, APD closed above the upper band at least five times over a four month period. The indicator window showed the 10-period Commodity Channel Index (CCI). Any dips below -100 are considered oversold and moves back above -100 signal the beginning of an oversold bounce (green dotted line). The upper band tag and breakout started the uptrend. CCI then showed tradable pullbacks with dips below -100. This is an example of combining Bollinger Bands with a momentum oscillator for trading signals. 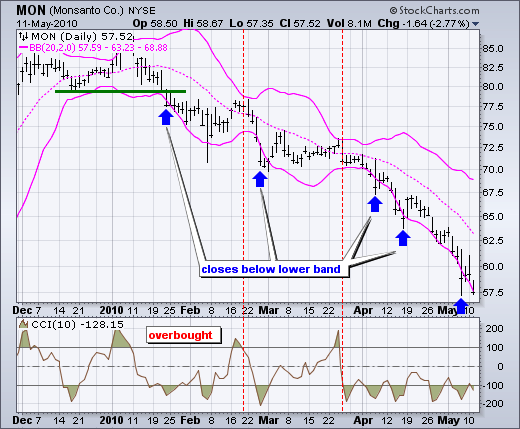 Monsanto (MON), on Chart 7 shows a walk down the lower band. The stock collapsed in January with a support break and closed below the lower band. From the middle of  January until early May, Monsanto closed below the lower band around five times. Note that the stock didn’t close above the upper band once during this timeframe. The support break and initial close below the lower band signaled a downtrend. Essentially, the 10-period Commodity Channel Index (CCI) was used to show short-term overbought situations. A move above +100 is overbought. A move back below +100 signals a resumption of the downtrend (red arrows). This system pinpointed two good signals in early 2010.

Bollinger Bands mirror direction with the 20-period SMA and volatility with the upper/lower bands. Essentially, its possible to determine if prices are relatively high or low. The bands should contain 88-89% of price action, which makes a move outside the bands significant, according to Bollinger. Actually prices are relatively high when above the upper band and relatively low when below the lower band. Nevertheless, relatively high should not be considered as bearish or as a sell signal. Relatively low should not be considered bullish or as a buy signal. Prices are either high or low for a reason. As with other indicators Bollinger Bands are not supposed to be used as a stand alone tool. Chartists should utilize Bollinger Bands with a basic trend analysis and other indicators for confirmation.